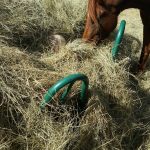 One of my favorite trainers, Sandra over at Hippologic, has been asking interesting questions on her Facebook page lately. It’s always fun to see peoples answers and occasionally I’m compelled to put in my own two cents. The last one that really made me think was, What is the ultimate trick you would like to teach your horse?

I thought of bowing without me having to hold his leg, laying down, cutting, riding him! But they all seemed so mundane, thoroughly not worth mentioning. As I vaguely pondered it later in the day I thought of the one thing that has fascinated me that I have never been able to figure out. Scent training. I have tried different things, mostly trying to teach him to find the children based on names. The trying is because it’s hard to wrangle children while working a horse, they run away and play.

After posting my answer Max Easy answered my comment saying how easy it was. She is another very good clicker trainer who always has interesting things to say. She and I don’t have much in common, her being a vegan and me running cattle and all 😉 I think it’s important for people to know others who they have little in common with. Expand our horizons and all that. We get so isolated in our little circles of people who agree with us on everything.

Just associate the scent with reinforcement, she says, no problem, she says. No problem my arse, but how? More details I begged, she kept answering, I remained confused. I left my computer to eat the breakfast my very sweet husband had prepared. While eating I told him of our discussion and how I absolutely could not wrap my mind around it.

He sat and thought. Only for a brief moment though, he’s very smart it’s one of my favorite things about him. That’s easy he said, I thought I might have to kill him. Why did people keep telling me that? Then he gave me a comprehensive, well thought out training plan broke into small easy to teach steps perfect for clicker training. Have I mentioned he likes computers and tractors, he is by no means a horseman. Apparently I really am the only one who can’t figure this out.

Later that day when I had a chance to sneak out and work Rusty for a minute, I rifled through the dirty laundry first and took some stinky socks with me. Children are hard to corral, socks hold still. I held one in each hand, one up to his nose for him to sniff the other out away a little. He sniffed one then the other, click. I dropped the other on the ground. He sniffed one then the other, click. He was starting to get the hang of it.

Today I grabbed two pairs of socks. One from each child. Same procedure, then I dropped two socks on the ground. I chose one of the socks out of my pocket and held it for him to smell. He sniffed, nibbled, them dropped his head to the socks on the ground.When he touched the right one I clicked and rewarded enthusiastically. We switched back and forth, I tried to keep the sock choice random. Then the child belonging to one of the socks tumbled underfoot. I held his sock up, Rusty touched the child. It was working.

Max was right it was easy, and it does seem to be working. I will have to be sure to keep some dirty laundry around at all times. That should not be a problem.

Will load video when I am at a location with better internet! 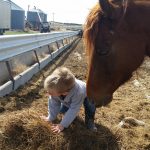 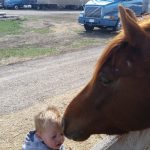 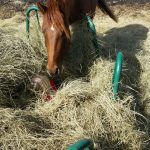