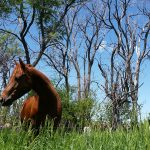 It wasn’t a good working. There are times when things go well. I come back to the house giddy and bursting at the seams with a joy that carry’s on for the rest of the day. Not today.

I wasn’t Rusty’s fault. He was great. A little pushy and frantic. It’s been weeks, a month maybe? since I’ve done anything with him. I’ve come for Coyote many times. I nearly got my finger bit off from careless feeding when I offered him a consolation award as I closed the gate behind Coyote. Mostly though I’ve let him out to graze and brought him back in.

Today one child was off with his father in the tractor, the other was outside playing, ignoring her beloved cousin who was here to play. I left the cousin watching TV and thought I would sneak out and play with my horse! I was excited and things were going well. I had brought along some dirty socks and was rewarding him for finding them. Then I was found. What fun is playing by yourself when you could follow your mother around, talking nonstop?

I wouldn’t mind so much, don’t usually mind, but my horse was frantic for his treats and clicking at the exact right moment really does take some concentration. I ended up shrieking at her. Afterwards I felt awful but there’s no taking it back, and I really did want her to leave me alone. A couple of minutes with my horse doesn’t seem like that much to ask. Of course it’s way too much to ask and I gave up on playing with him.

After putting him away I tried to follow her around and be a kind loving mother. It was too late, I was already too grouchy. It was nap time anyway so I sent her off to bed, which would have been the perfect time to work with Rusty but the whole grouchy thing, so I cleaned house. Cleaning resolves grouchy better than anything. My house is clean, cleaner that is, and my horse unworked. Maybe tomorrow. 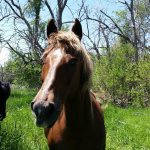 The horses are enjoying their pasture 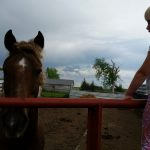 They are proud of what they’ve done to their manes 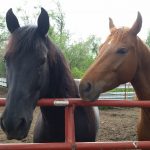 One thought on “I Did Work Rusty Today, But…”