This is the second installment of my recent horse adventure.
I searched facebook trying to figure out this hauling stuff. One hauler was making a trip past us and up to Minnesota. That was the right direction but going the wrong way. I looked a little closer and they were from Colorado. That meant they should be coming back this direction. I contacted them and they were! It was almost perfect.
Now we had to figure out how to pay for the horse. I’ve never done things quit this long distance before. We settled on a wire transfer. I stopped in to my bank and got things taken care of. I thought.
My bank happily sent quite a bit more money than I asked them to. You hear so many stories about crazy horse people and sellers who do everything wrong. These people who I had never met, over a thousand miles away, quickly let me know about the problem and took steps to fix it. When my parents went to look at the horses they said that Melissa and Sharon seemed like really good people. I guess they were right. I can not recommend Justapesty Morgans highly enough.
The shipper picked Flair up bright and early Tuesday morning. Then he drove straight through, I don’t know how people do that. I can’t make the trip in one day. He got here much earlier than I would have guessed, by seven thirty Tuesday night. He sent pictures along the way and gave me updates. Flair had plenty of hay and looked as good as a horse can when he’s just been hauled for 13 hours. I was very happy with the job Mountain High did https://www.facebook.com/mountainhighequine/
Let me see, is there anyone else I need to thank? This all went so smoothly thanks to all the wonderful people who helped. I guess I should thank my parents for going to look at both horses for me. But, it is mom’s fault that I ended up with another horse so I’m not sure that she gets a thank you 😜 Thanks mom, and dad for putting up with all this horse stuff.
We unloaded in the dark and put him out in the pen he will be staying in. I would have like to look at him more and get pictures but I hated to bug him anymore than we already had. He quietly walked into the dark pen and went to looking around. He didn’t run the fence line screaming like Rusty did. He was calm and curious. A little concerned about the whole thing but he had the right to be. I haven’t heard him calling at all.
This morning I went out and pitched him some more hay. In the dark still. Rusty had spent the night at the gate keeping him company. Rusty hasn’t been the same without Coyote, hopefully these two can be friends.
I can’t wait to play with Flair more. We may not end up calling him Flair, we’ll se what he does end up being called. If we let the kids have a say it could get interesting. He’ll get to settle in and get used to things before I mess with him. He is just as gorgeous in person as he was in the pictures and video. I’m thrilled that we got him!
Wham It Silver is still available…
Although buying him will make my mom cry. 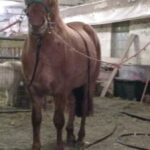 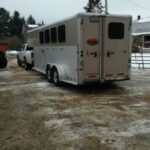 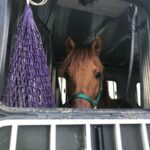 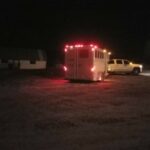 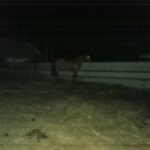 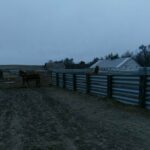 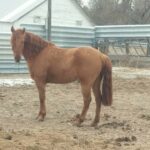 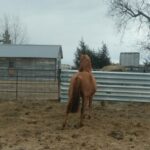 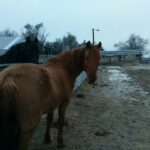 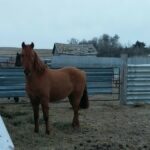 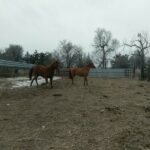 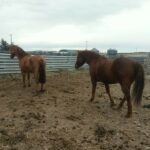