Sometimes I question my judgement in getting my son a young mostly green horse. Something older and more experienced would be the wiser if not as cool choice.
Then there are times like this when this horse amazes me and assures me that he will be a great horse for my small child. Not yet, but soon.
The horses were all turned out in the yard to graze. I was keeping an eye on them to make sure they didn’t get into trouble. They had been grazing between and on the hay bales for a little while when I needed to get them and put them away.
I took Harvey first because he came to greet me. Then came back for Rusty. Smoke I took around to the other gate and tried to convince him to eat his allergy medicine.
The whole time Heildorf stood between a row of bales looking at me. He’s usually a bit stand offish and doesn’t always want caught. He will usually follow when the other horses come up though. I did think a couple of times that it was odd that he wasn’t coming at all. I was in a hurry though and didn’t put too much thought into it.
When I was finally done with the other horses and went back for him I realized why he hadn’t ever come.
Heildorf had wandered down a very narrow row of bales. As in touching in some places. Apparently he isn’t bothered by tight places. From the side I hadn’t been able to tell that his row was any more narrow than the row the other horses were standing down. At the end of the row the electric fence wire that surrounds the yard ran right across the end of the bales blocking the exit.
Heildorf was well trapped. Had been for quite a while. He had been looking at me over those bales when I checked on them long before I went to bring them in.
I went around the bales and over the fence. I was able to drop the wire without leaving him again to go shut of the power.
With it on the ground he would be able to step over it, once I got him haltered. He wasn’t thrilled about being caught but didn’t immediately run me over in the tight quarters. I stepped out the end of the bales and onto the wire to hold it down for him to cross. Or I did after first backing into it and getting a good shock myself 😏
He didn’t bolt out when I asked him to come. He did come with great enthusiasm though. Once out he pranced and spooked on the end of the lead rope as we walked to a gate.
He had controlled himself while penned now he was blowing off some steam.
The mind on that horse is incredible. The self control he exerted to keep from panicking and going through the wire or flipping and getting hurt between the bales was amazing. He stayed calm and controlled. Not even screaming for the other horses when he was left all alone.
In all his captivity lasted maybe half an hour. Combined with how willingly he lets me hose his nose down, it was a half hour that proved the mind this horse has. His bloodlines are everything I could ever want in a Morgan, Justapesty Morgans knows how to breed them. Heildorf, Justapesty Solar Flair, lives up to the names in his pedigree. I think I need to stop worrying about whether he will work out for us and make time to get to working on him!

p.s. Of course I stopped long enough to take pictures! He was standing nicely and could wait another minute 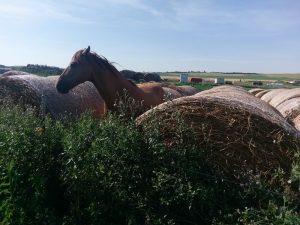 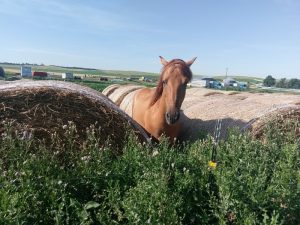