I took Rusty and Harvey in to the school to do a few tricks for the kids.

It was a perfect day, warm and still. Tomorrow it is supposed to snow. We thought we should hurry and get this in while we could.

I unloaded them with plenty of time to spare and let them walk around looking at things. We grazed near the heavy equipment and the big scary building. The went through a few tricks to see how they were feeling.Harvey wasn’t feeling it but he hadn’t been at home either before loading up. I wasn’t holding out much hope for him.

When the time came we could hear the kids coming clear down the hill. They bounced and sang their way to us enjoying the beautiful day.They all spread out along the side of the parking lot and waited.

I wasn’t ready. As much as you try you can  never really be ready. I rushed to get Rusty and get out there.

Rusty was great, he fetched and played ball and rang his bell and painted. He even managed to rope the dummy on his first try! We, I? I guess Rusty was there and demonstrated but didn’t exactly talk 😉 I talked about how he helps me teach school and how we do a lot of the same things that the kids do in school.

He didn’t pull the chicken out of my pocket as good as he usually does and was slow going after the toys. He dropped the handkerchief when wiping my nose. Those were the worst blunders though. He happily sniffed children and went about his job in his usual business like manner.

Harvey was not present. He started out by standing and staring off into the distance. The sidepass that he is usually so good at was gone. I was able to send him out around the bale Rusty roped and he did some good, if very slow, Spanish walk. Harvey did chose his balloons in the proper colors and didn’t spook from the children holding them so there was that at least. After we finished the children  all took turns petting Harvey’s nose. With the offering of a treat he was convinced to hold his nose at their level.

I think my favorite part was at the end though. The children stood in front of us for a group picture. Harvey and Rusty both buried their noses in the mass of small children, sniffing and soaking up the pets. They both did a great job of not biting off small fingers and being good ambassadors for the breed and positive reinforcement! 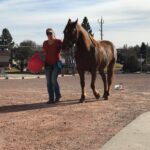 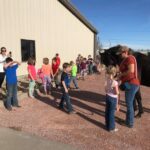 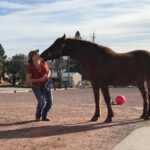 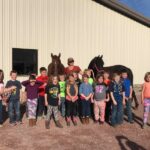 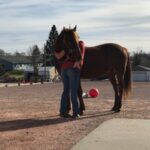 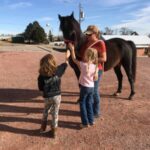 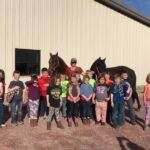 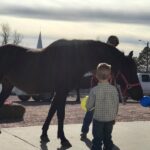 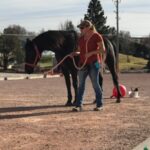 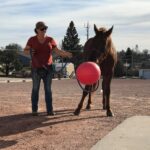 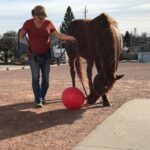 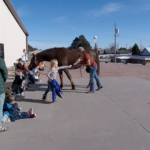 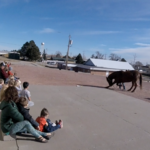 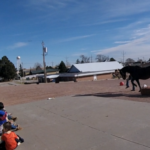 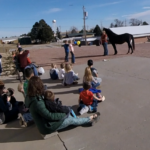 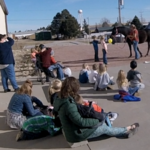 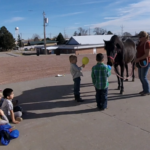 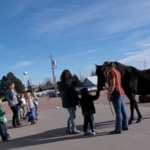