There’s a storm coming. We know it is coming so we have time to get ready. Of course we are calving. There’s nothing like baby calves to bring on  the snow.

We spent today rearranging and putting out straw bales even though there’s still a day of good weather to go. Better to start early and get everything settled in  good. That way they aren’t getting jostled about and separated from calves or calving while the weather is bad. Not that they wont calve but at least it wont be because we were bothering them. They have a better chance of choosing a good spot and not having trouble if left alone.

There is one pen with three calves and two calves. One cow calved and wanted nothing to do with the first calf. A cow who was working on calving claimed that calf as well as the one she eventually had fortunately. The cow who had the first calf had a twin and wanted that one. We’ve left the little group together and separate from the others. We can watch them more easily that way and the cow who took them booth has less room to keep track of two in.

Then there is the heifers, young cows who have never had a calf. They are notorious for having trouble, both in giving birth and in figuring out how to be a mom. They wont claim calves, wont let them nurse, claim every calf but their own, and generally get confused. They need to be kept where they can be easily watched and separate from the main herd. There are a couple of older cows in with them who were limping so we kept them up too to keep them from halving to walk very far.

Then there’s the horses of course. They can’t go in with cows. They are not nice. That’s three pens.

Then there’s the main herd. We decided to pair the cows with calves out of the main herd. They got to go in the pen that the three calves and two cows were in. There’s an old barn the calves can get inn for better shelter.

My father in law and I went out and pulled the pairs out of the bunch. It works better as a three person job. One to watch the gate and two to work the cattle. Fortunately there were only a few calves so far. We got it done fairly easy.

We closed one set of gates and I walked down around the cows and calves to bring them up though another gate and into the pen with good shelter for them. No big deal. I stayed next to the fence. If anyone was grouchy I could just hop up the fence to safety. The cows are usually pretty quiet. There had been one staring at me over the handlebars of the fourwheeler with large alien eyes while I tried to convince her to come up. She worried me a little.

I walked around the small group carefully looking ahead to let the cows know I wasn’t singling any of them out.

The cow with the big eyes didn’t even hesitate. She dropped her head and came at me.

I dove for the fence.

Hands on the top I jumped. My foot hit the rounded side of the guardrail. And slipped.

I could hear and feel her behind me. I wasn’t going to look back. I jumped again, got a foot hold this time and climbed up. finally looking back I saw her right behind me, mouth open, tongue out, apparently in threat and bluff luckily for me. It was only because she didn’t really want to eat me that she hadn’t.

My father in law came along about then on the fourwheeler and pushed them all up through the gate. I climbed down, completely unashamed of running for shelter.

We had finished the job  and everything is mostly ready for the storm. Now we wait to see how much we will  actually get. Hopefully the reports of thirty inches are exaggerated. 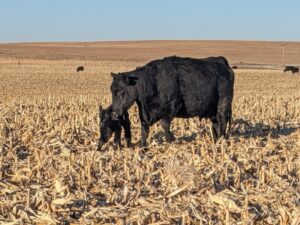 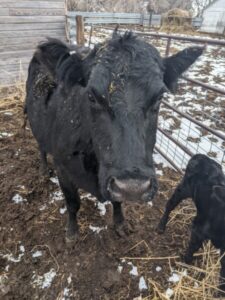