I got a marathon training session in on Rusty The other day. At least that was what it felt like. One hour. Back in the day I had up to six horses that got an hour every day. This time it nearly killed me doing one. I am so incredibly out of shape. But it was fun.

I have been letting actual saddle training fall by the wayside as I play with teaching him tricks and adding even more buttons and levers than I usually put on a horse. I realize that all this is adding to his brokeness and helping him be ready to ride but it’s not putting a saddle on him. So I brought him up to the round pen, because it’s close to the house and I don’t have to carry a heavy saddle as far, and brought out the saddle.

The round pen, sitting unused, has grown a little grass. It blew his mind. The horses have been taking turns being turned out in the yard to graze, his turn hadn’t come yet. He did good until I put the saddle on then left him to hang out and graze a little thinking that not only would it be a reward for being saddled but might take the edge off his craving for green. Didn’t work.

He was way to distracted to accomplish anything so other than start a fight we went for a walk. He hadn’t been out for awhile but he did good. No spooking, no trying to run me over, he just wanted to walk too fast. I hate to discourage that speedy Morgan walk but he has to learn manners so when his shoulder passed mine we circled. I would like to say the problem was cured, that might be going a bit far, but it is better. After unsaddling I walked very slowly back to his pen. After a few circles he, asking me continually why I wanted to walk so slow, he was willing to walk beside me nicely. 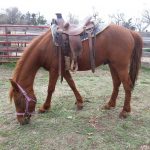 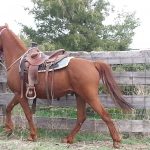 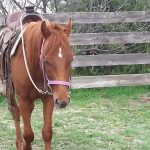 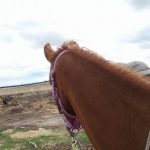 I know this blog is supposed to be about Rusty but how can I talk about him and not the other horses? So…

I finally, after much debate, Sprang for the Horse Tricks 101 Academy. My computer genius husband downloaded some of the videos and put them on our freeNAS so we can watch them at home since our internet is way to slow to stream video. My daughter (three years old) and I were sitting on the couch watching them interestedly. She saw a horse playing with a ball and wanted to know if we could teach her horse, Princess Onna to do that. I said sure. She remembered far more enthusiastically than I would have guessed. So I snuck out a few times to work on targeting. The other day we went out for a ride and when we were putting the horses away she wanted to work on training Princess Onna. Here’s the tail end of our “training”. I have to give treats, she, and I, worry to much about tiny fingers.