Not with Rusty, I haven’t hardly had a chance to touch him for a couple of weeks now. I’ve been pushing hard to get some much needed work done to the house, between that and the children I haven’t had time for fun horse stuff.

Tanna came over and we got to move cattle on the other two horses though. It’s getting to be time to bring them all home from summer pasture. This bunch were a few miles away, across the highway. The guys rode fourwheelers over and we rode to meet them. They went on the north road, gathered the pasture and headed them back towards home on the south road. We road out the south road and met them to help get  the cattle across the highway, past the neighbors yard that they always like to play in.

Apparently today was opening day of pheasant season. Shot guns were a constant background noise as we rode. I wished I had left Daisy at home she is terrified of guns, even Coyote and Onna were flinching from the blasts. I worried about the ride over taxing my poor old Coyote, he’s nearly twenty and out of shape. They mostly plodded. All the way. Slowly. I was afraid we would be late to the highway.

We weren’t. We passed the highway and kept going down the dirt road. Still no cows. We were nearly to the pasture when we started to hear them. They finally topped the hill, the leaders at a run, the tail dragging and a line of hunters following behind.

As soon as we turned the horses they went insane. Especially Onna. She spun circles and scattered herself sideways. Tanna sat up there with no stirrups and rode her like a pro. But the cows moved nicely, they went right past the yard and crossed the highway without even seeing any cars. Onna settled down a little but it was still a mad rush down the lane towards home. My poor old horse managed to find plenty of energy for the ride once it was in a homewards direction. I was still worried about him but for different reasons. He lived as did Tanna and once home we got the calves worked then turned back out with their moms. And all in time for lunch. 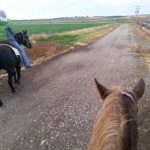 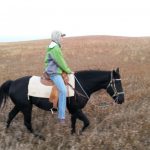 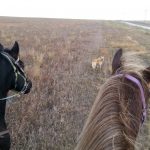 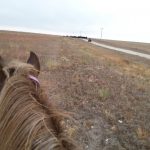 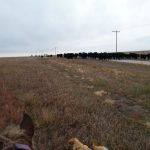 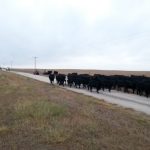 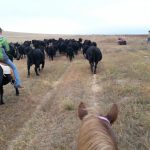 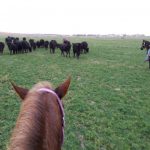 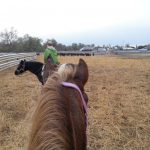