I shared my delight and confusion when Rusty came at a gallop in front of an audience when I called him last week. Or sometime. Today he acted in a manner that was much more like I would have expected.

We went for a walk. A short little jaunt down the driveway far enough for us to practice our cutting a bit. Then right back into the yard, in behind the wind break. My fingers were getting numb, it was cold out in the wind.

The father in law had been doing something with a semi. I could hear a four- wheeler running on the other side of the shop as we approached and the sound of voices. Rusty heard too of course. His head got higher as we got closer, his ears pricked and his step got higher. He started to prance then trot, of course I didn’t have anything on him. Finally he took off, ran down to the other end of the horses pen to where the cows come up for feed. The other two boinged across the pen like deer, everybody’s tails up over their backs. With lots of snorting they stopped and looked around.

As the guys watched him leave the father in law turned to me and said “bucked of huh?” I gritted my teeth, thinking stupid dang horse. Walking on down towards the horses Rusty turned and watched as I came. As soon as I got out of sight of the laughing men Rusty turned and ran at me in a flat out gallop. As a precaution I moved out of the slightly icy road into the snow covered grass. Sure enough, he got to me, slammed on the brakes and feet went sliding in all directions.

I could still hear voices, as the guys stood talking unaware that my horse had come running back to me better than any puppy dog. They were left to think I am a silly girl who’s horse ran away. Any normal person would have had a halter on their horse. Well I have news for them, I’ve never been normal! (Of course they probably never gave it another thought and it’s just my insecurity putting these thought upon them) 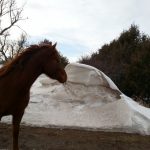 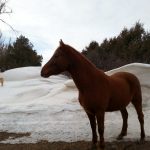 This is after a few warm days. 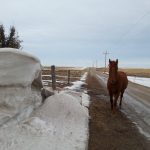 All the snow has melted a lot

2 thoughts on “More like I Expect My Horses To Behave”