I’ve been riding, just not writing.

Rusty has been, changeable. To say the least. After one beautiful ride, way back whenever that was, he went insane. The next time we went out there he tried to buck, tried to, in typical Morgan fashion he’s no good at it, tried to rear, and spooked at everything. I got off and lunged him, hard, then got back on. We made it home.

Back in the comfort of our arena we trotted some circles. I had not liked the complete lack of control the halter allowed when he pitched his fit. I got my bit out that I had chosen so carefully for him. The little leather snaffle, so soft and supple and some day able to be used without a headstall. I put it on him and let him wear it while we worked. He got close to his usual self and we stopped for the day.

The next time I got to ride him I put the bit on again. This time I ran reins to the bit and another set to the halter. In double reins I could use the halter he was used to while introducing him to the bit. He was awful. Running sideways when asked to turn, refusing everything. Where had my horse gone? He had been so willing, so light and responsive. Now he was terrible.

Nearly in tears I texted a friend and asked if she had a sidepull I could try. He didn’t like a bit and a halter offered nothing when I needed to pull him around in a one rein stop or try to keep his head up. She thought she could find one and offered to come ride with me bringing a couple of bits that she liked. I was willing to try and thrilled at the thought of someone to try riding out again with. In the end duty, and her many jobs, called and she wasn’t able to ride but she dropped of the bits and, not a sidepull but a hackmore.

I haven’t had hardly any time to ride since then but I have managed to make it out twice. Once for each bit. The first was a snaffle, they both were, this one had two bars connected by three links of chain. I was hesitant in part because I was afraid the chain would lay on his tongue making it hard to chew and swallow food. Part of why I theorize he doesn’t like my little leather bit. It was not a problem. I rode with the double rein again and didn’t need to pick up the rope to the halter once. He was light and responsive and obviously liked it better than the leather one.

The second bit was her great grandpa’s, I think, if not it was her grandpa’s, either way it’s really cool to have a bit handed down like that. It has the two bars connected by a figure eight piece in the middle. It was too wide for him, I don’t know if that really matters, but it stuck out a fair bit on each side and I worried that the center piece could possibly get on the bars of his mouth. He worked wonderfully in it. The same as the other one really. Before riding we went for a walk out to where he had so much difficulty earlier. He was a nervous wreck, hardly able to concentrate at all. If he can’t go for a walk out there he’s not going to be able to ride. We’ll have to keep taking our walks.

Back in our arena I got on. At one point my direction seemed laborious and excessive. I lowered my hands, shifted my weight and turned slightly in the direction I wanted him to go. He spun off that way. I clicked and rewarded. He started spinning randomly in that direction. I sat and waited. He finally stopped walked forward again. He is such a strange combination of responsive and idiotic. He can pick up new things so fast and yet still be unable to remember something we’ve been working on constantly for a year. His concentration is so intense it scares me but he is completely scatter brained. He is fearless and curious but terrified of everything. My husband thought perhaps bipolar and I don’t disagree but might instead call it a double whorl. 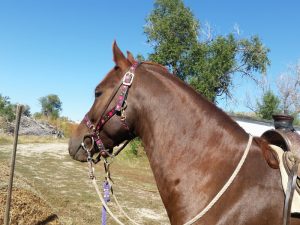 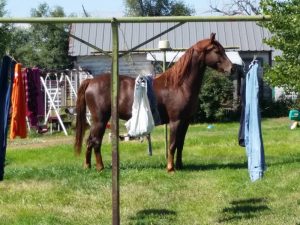 One thought on “That Other Rusty”