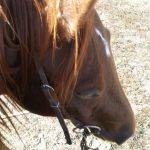 I need to get this written down while the epiphany is fresh. It’s amazing how sometimes you hear the same thing, again or in a different way and it becomes clear. Or seems clear. Sometimes what I think is an epiphany becomes as clear as mud when I try to put it into practice. This, though, I really think is quite clear and simple, I simply need to pay attention and do it.

Back chaining or building a behavior chain is something I hear and read about all the time with clicker training. Breaking an action down into its individual and very small pieces and concentrating on each one separately instead of lumping an action into one big, and confusing, movement.

We are working, loosely, on stops followed by a roll back. We aren’t drilling on it, but I try to do a couple every time I ride. I always feel like I’m all over the place so I have a few set things that we cover consistently. Right now it’s stopping, roll back, trot departure, turns on each quarter, trotting poles, and trotting circles. Other things get added and basic steering is built in, plus, when able I try to build up little trips out of our arena. Slowly building courage, for both of us 😉

The roll backs are coming pretty good. Sometimes the stop is sloppy. Sometimes the turns lack momentum or are around the middle. It’s what we are doing anyway but I need to put more thought into each piece. Instead of randomly treating I need to get one piece down and then add the next step. So I guess we need to perfect our stop. Make sure that each time he is offering the same response. I exhale, say whoa, and sit. In response he should drop his hindquarters and stop, fully and completely. If I then continue to sit and hold onto him with my legs he should go into a back. We have both of these for the most part. Sometimes his stop is slow, he wants to keep going. His back is often crooked, that can be fixed once I have more control of his hind quarters. I will keep clicking and rewarding after each one.

Once that is down and easy for him we can start again on the roll backs. Ask him to give his head around nearly to my knee on the side we are turning to. Open up that rein so he can “go through that door”, apply outside leg and rein asking him to go through the door. I suppose at this point I will reward him for and after the turn. Need to make sure he is turning on the hind quarters not around the middle. Once that is good we will move onto the next step.

The next step is to launch out of the turn with speed and power. Eventually I will want him to go straight into a canter, for now a walk then trot is good. By this point he will no longer be rewarded for the stop or the turn, unless we are going back and reinforcing them. His click will come after he has performed all the steps in the chain, stop turn, and go. In the beginning it will be a take off, click, slam on the breaks and get reward, but as he understands and get the maneuver down the treats will fade out and we can continue to lope, or trot 😉

In clicker training the act of setting a goal and writing down the goal and your plan on how to reach the goal is strongly emphasized. I don’t usually do it. This is my plan, my goal, it is nice to have it thought out and written down, it helps to clarify and think through the actions needed to accomplish said goal. Now to see if we can reach it.