My daughter is brilliant. I know all parents think that. You’ll just have to take my word on it.

My son is sweet, and darling, and a bit of a handful. He is emotional and tends towards full blown fits.

I like to think we manage to avoid issues most of the time with preventive maintenance. His sister likes to push his buttons though and is very literal in her interpretations and upset when he isn’t. It leads to meltdowns. I admit to asking her more often than I probably should, why she had to do that! Couldn’t she just let him be?

I admit also that I give him what he wants more than I should just to get him to stop. I know it’s wrong, I know the behavior that is being encouraged. I know better. But the screaming! Sometimes there are things you do to survive.

He’s a great kid, but pointing out the good qualities doesn’t help us to the point of this story.

His sister sits back watching as we try to avert meltdowns, or at least get hi to stop a tantrum. Then she looks at me with her big serious eyes and says “You just reinforced that behavior. Stop giving him what he wants when he cries and whines because that’s reinforcing him to do it”. You don’t know judgement until you’ve seen it from an eight year old who knows better. The horse groups on facebook are nothing in comparison.

With her strong positive punishment I am learning to do a better job of holding out and waiting until he does something that I want repeated and rewarding that.

Who knew this would be so hard. I’ll take horses any day over trying to train children. If only we could turn them out to pasture when we’re done playing. It would make child rearing a LOT easier. 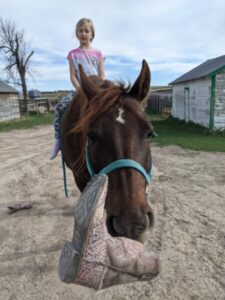