I got it. He is not happy about it.

I was working really hard to get him to like it. He learned to tolerate it, I gave up. Every time I let him out in the yard to graze I put it on him. He got to eat the nice green grass on the condition that he wore the bit, positive association right? Kind of?

The I forgot, got tired of it, was in too big of a hurry, and it fell by the wayside. I haven’t had a chance to ride him anyway. Well almost no chance, I took him far a very little ride quite by accident the other day. Other than that fun, tackless, adventure, I haven’t ridden him. He has been grazing and we have been working on painting. That’s about it.

The children, one of them in particular, have given up naps. That leaves me grouchy and in no shape to work with him anyway. And no time to write about what we aren’t doing anyway. Painting is coming along slowly. He has been painting large objects, like barns, for a long time. He happily touches the paper with his nose when no paintbrush is involved. As soon as he’s holding a paintbrush he starts flailing wildly, hitting anything insight, besides the paper. Aim is difficult, we will keep working.

After accidentally riding Rusty without a bridle I’ve worked up the courage to ride Coyote without too. I tried once, a very long time ago, and he ran off into the barn where I jumped off as soon as possible. I’ve been to scared to try it again. I ride him all the time without using the reins but having them there as a backup is such a crutch, I couldn’t quite get over the need and try without anything on him. I didn’t die on Rusty.

The next time I went out to catch Coyote while he was out grazing the yard and put him away, I led him over to a step and hopped on. We went straight to the fence and I climbed off. Once again I didn’t die! Always like when that happens. The next day instead of a straight, terrified, line, we meandered, did a couple turns, and added a back. Now I’m hooked. I was so sad yesterday when he was standing so close to the gate that it didn’t make sense to get on. Not dyeing is great reinforcement for any behavior and seems to have trained me. 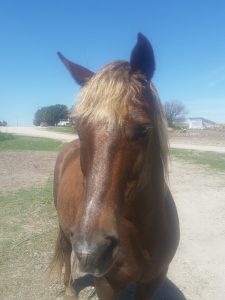 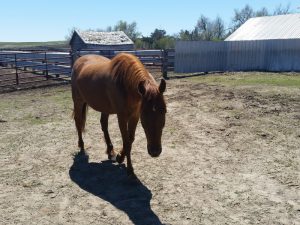 4 thoughts on “No Bit News”