According to tradition some whorls are bad luck.

That is such a broad term. What exactly does it mean? How did someone decide such a thing?

I’m not one for superstition so I enjoy breaking it down and looking at possible causes for such superstition. One of the most famous whorls, and one of the easiest to break down is the shredded collar, a ‘wheat’ whorl up the base of the neck. First what does a wheat whorl look like? There are so many different types of whorls that appear on the base of the neck. Does that mean they are all ‘bad’?

I interpret the ‘wheat whorl’ as a big open splaying whorl, a wide line with the hair growing outwards from the center. That might not be the original interpretation. So many of these things are left to our imagination.

So why would this be bad luck?

This type of whorl will draw a horse down onto their forequarters and often accompanies a very downhill build. The neck will often be ewed and upside down. Some descriptions talk about wheat whorls that extend the entire length of the neck and down into the chest. This would exaggerate the effects even more so. That leaves us with a horse who is out of balance, working on the front end with the hind end not engaged. When a horse moves like this they are far more prone to lameness and tripping. Extreme lack of balance can lead to behavior issues that may lead a person to decide a horse is crazy. The horse in this picture would buck when pushed beyond what his body was capable of offering. When a good trainer stepped back and allowed him time to build the muscle and mental capability to perform the tasks asked of him he was a steady willing mount.

“Bad luck’ is a loose term that doesn’t help us at all in horse training. If, instead of dismissing problems as luck that we are unable to change, we look for physical issues behind the bad luck we are far better able to diagnose and fix the problems causing the bad luck. There are no bad whorls, not even this one. 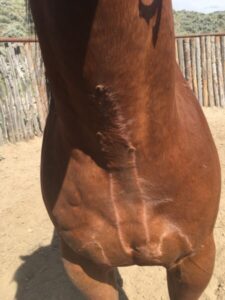