I was out playing with Heildorf the other day when the UPS guy showed up. He came flying past to deliver a package to the back door, instead of the easier to reach front door. But, whatever. I like our usual lady better.

Those trucks are scary! The make all sorts of racket. I wouldn’t blame any horse for being scared.

We practiced a few of our basic responses though. The same ones I use anytime we encounter something that scares my horses. Riding or on foot.

I let him move his feet.

Horses have a terrible time holding still when they are scared. The more we can let them move the easier they will be able to deal with their emotions. Avoiding being run away with is always important! We can let them circle though, or walk a little. On the ground we can let them move as much as they would like while staying safe. Keep a hold of the lead rope, or, if you are in an enclosed area, let them go!

Here Heildorf hit the end of the lead and that was enough for him. He was able to start coming back to me.

Don’t think that if you reward your horse once they’ve finished spooking that you are going to train them to spook. Instead you are training them to come back to you. To look to you for comfort once they get past the initial fear.

Then you are building positive associations. They will start to think of the scary thing as bringing good things, food.

It doesn’t do any more good to force a horse to confront what they fear than it would do for us. If every time we saw a spider in the house we were forced to go up to it and touch it, we wouldn’t start not being afraid of spiders!

Instead we would dread finding them more and more. We would start searching them out ahead of time so we wouldn’t be forced to go through with the confronting part!

If instead, every time we saw that spider, someone comforted us. Told us about the spider, how they can’t really hurt you. They will take care of the spider for you so you don’t have to face it. Then maybe gave you a piece of chocolate 😉 Son you would not only stop dreading the spider but turning faithfully to the one who helped you deal with it. Trusting them to help you out.

That’s what we want from our horses. To turn to us without hesitation any time they are afraid and to trust us to make it alright.

We can not reinforce a horses fear.

We will never make a horse more afraid by rewarding them when they spook. All it does is build positive associations with what scared them. Soon they will seek out the formerly scary thing hoping for a reward.

Harvey is learning to jump through hoops. It may not look like it here, but trust me on this.

Today we added a little extra something to the hoop.

I love how in less than half an hour he went from scared of it to willingly walking through on his own. Just wait until we work  on this a second time! He’s going to be plowing right through there.

Who can find a woman of worth? For her price is far above rubies. Proverbs 31:10

I did like this particular version for this purpose.

A good woman or a good mare. I don’t think it’s wrong to think this applies to both.

We brought Lady in. My daughter is getting better all the time at haltering by herself. They were using the pickup as a hitching post while she brushed Lady and played with her.

My son was bouncing and climbing about as usual. Climbing the bumper of his fathers vehicle. He didn’t seem to be causing an damage so I let him go.

Until I heard a thud. Looking over Lady’s back I didn’t see him anymore.  Lady hadn’t so much as flinched. I walked around behind her and there on the ground lay my son. He had let go and crashed down right next to her. He hadn’t been close or in a position that was at all dangerous. Until he fell. His head had  landed much closer to her hind legs than I was comfortable with.

I picked him up. Hugged away his tears. Offered to get his helmet and let him sit on her.

Once on Lady’s back his sister untied her and lead her brother off. They went exploring around the yard. My daughter leading using the proper form we’ve been working on for 4H. My son sitting happily. No desire for reins or the slightest control.  In between their laps around the yard they came to play with me where I was working with Harvey. Lady walked under the curtain without hesitating. This hot little Arab mare. 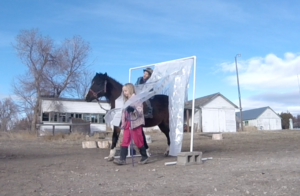 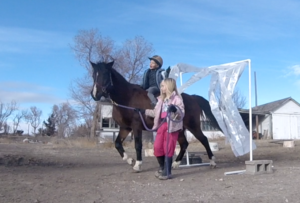 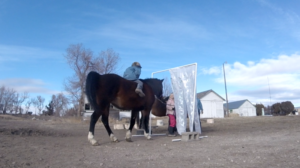 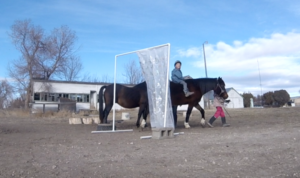 I think most women have been there.

One minute you’re having fun. Dancing with a cute guy. Then. Next thing you know. They do something totally inappropriate.

You are caught unaware. Embarrassed for both of you. How could he have thought that would be fun or cool? It almost makes you want to stop dancing with them!

When a guy is this cute he can be forgiven almost anything.

Harvey and I have been working on asking him to go through our ‘hoop’ to his mat then back to me.
Yes I know our ‘hoop’ is square 😉
As he gets better at this I hope to raise the post at the bottom and ask Harvey to increase speed.Maybe even hang some stuff from the top.
Starting with the basics though. Harvey is doing great at being sent away then coming back to me 💜

I got Heildorf because he was started. I ‘thought’ it would be nice to have one horse who was ready to ride without needing too much work.
Boy was I wrong. He was so badly traumatized by his starting that he not only needs started over but lots of help overcoming the trauma from complete learned helplessness.
So he spends most of his time hanging out in the pasture. I wanted to teach a horse to jump through a hoop though so he got to come play.
It was quickly apparent that he would have to learn to work calmly with me first. Nothing could be accomplished if he ran in terror every time I asked him to go forward.
This is three days work.
The first day he nearly drug me off my feet.
The second day he was able to control himself and was beginning to realize he didn’t have to run from me.
The third day we tried working in just a neck rope. Not up to trotting yet but calm and controlled. With me because he wants to be not because he can’t escape.
We will keep building from here and hopefully overcome his fear of people.
We’ve all seen the picture of the pony jumping through the hula hoop right?
Well this is the start of our version. Obviously Harvey needs something bigger than a hula hoop and we are starting big, with the hoop that is. Starting small with the jump. And so slow as to be incredibly boring with the horse.
Eventually though the hope is to be able to call him to me through it and send him away from me through it. All things have to start small. We’ll get there.
This one is fun because there are so many little tricks we are working on inside of this bigger trick. Stay, come when called, sending away to the mat. And not shown, turns on the forequarters.